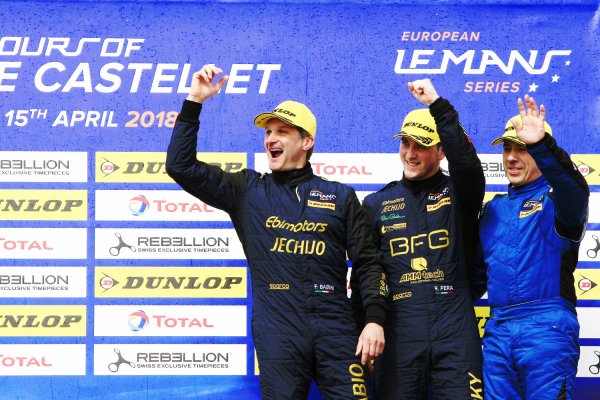 Debut with podium in Le Castellet

2018 European Le Mans Series had its first round in Le Castellet and Ebimotors team could finally launch their excellent Porsche 911 RSR car. Despite the disadvantageous weather conditions, the eight cars of the LMGTE category could officially test on the days before the racing weekend. Our gentleman driver, R. Narac, deserved a tribute as he gained the third best time (1'57.218) in the sessions dedicated to bronze drivers. Only the Ferrari F488 GTE driven by M. Griffin (1'57.110 - Spirit Of Race) and the same car no. 88 driven by G. Roda (1'56.991 - Proton Competition) came first.

After the two days of test, the crew composed by R. Narac, R. Pera and F. Babini were ready to perform seriously. On the 10-minute-Qualifying Practice the eighteen-year-old driver R. Pera placed his Porsche no. 80 on the seventh position with a time of 1'55.183, due to an about-turn during the warm-up lap. Thanks to a penalty to the Porsche 911 RSR no. 86 car (Gulf Racing), because of a technical anomaly at the end of the session, a position could be gained by our team on the starting grid.

Ebimotor’s Porsche 911 RSR no. 80 car started the 4 Hours of Le Castellet on the sixth position of the LMGTE category and R. Narac managed his first racing stint. The French driver performed an excellent start. He had an increasing performance and he could gain the second position after only 8 minutes after the start. G. Roda’s car, the Porsche RSR no. 88 (Proton Competition), came before ours. R. Narac did his best during the first hour of the race and passed his car to his teammate R. Pera on the second position. Enrico Borghi’s team performed their first pit-stop without any irregularities but losing some precious seconds. At that point, the team was on the third place. Despite their start at the end of the line-up, the Porsche 911 RSR no. 86 car (Gulf Racing) had a great recovery and became the category leader coming before the Porsche 911 RSR no. 88 car driven by G. Roda Jr. It was a sparkling success of RSR racing cars on the first three positions. Gulf Racing had an unlucky race: they were forced to drop out after an hour and a half due to a mechanical problem. R. Pera was second at that moment. A brawl between his car and A. MacDowall’s Ferrari F488 GTE car (JMW Motorsport) occurred but the race was still long. A dramatic turn of events happened due to an accident between the prototype LMP2 no. 21 (Dargonspeed) and the Ferrari F488 GTE no. 55 (Spirit Of Race) cars. The race control announced the full course yellow, a sort of virtual safety car. The pit lane was opened. The team from Cermenate did his second pit stop as they had to respect the times imposed by the championship for each driver (bronze, silver and gold). So, R. Narac replaced R. Pera at the middle of the race. After that, R. Narac restarted and reached the gentleman driver of the Ferrari F488 GTE L car, Griffin (JMW Motorsport), gaining the second position. Our bronze driver performed an excellent second stint and an hour before the end of the race, he passed his Porsche 911 RSR no. 80 car to his mate F. Babini. Ebimotors’s gold driver joined the racetrack on the third place after the driver change. Just before our driver, there was M. Molina (JMW Motorsport) who previously replaced L. Griffin and was racing fast at that moment. Despite our Pro driver attempts to recover the gap on the Ferrari F488 GTE car, the seconds of distance were too many and they did not allow us to recover a position. The victory went to the crew whose drivers were L. Griffin, A. MacDowall and M. Molina (JMW Motorsport), despite the leadership was held by the crew composed by G. Roda, G. Roda Jr e M. Cairoli for all race long. Due to a mistake during the last lap, they placed second. R. Narac, R. Pera and F. Babini ended their first seasonal round on the third position of their LMGTE category.

This was a great satisfaction for Ebimotors who can feel happy and satisfied by their performance while knowing that they can even do better.

The next round is the 4 Hours of Monza and it is scheduled on May, 13th.

We hope many of you will come!