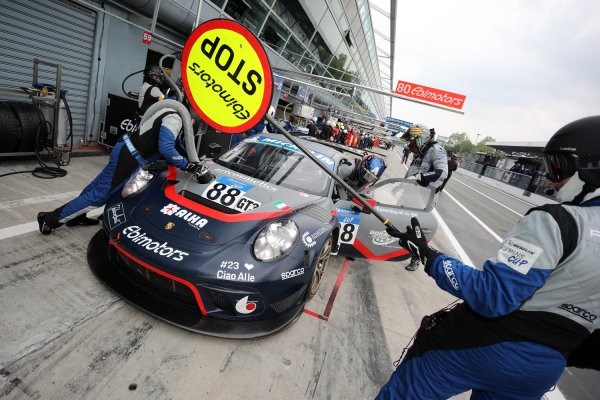 Monza in the rain and unlucky!

Last weekend the second round of the Michelin Le Mans Cup 2019 championship took place at the Ebimotors team’s home circuit. This is also the only Italian round of the season. The Autodromo Nazionale Monza welcomed ten cars in the GT3 category among which our and unique Porsche 911 GT3 R MY19 car, driven by Paolo Venerosi and Alessandro Baccani.

The two-hour race started with P. Venerosi (Ebimotors) on the fourth class position due to the time of 1:49.367 done by A. Baccani (Ebimotors) during the Qualifying Practice lasted only 15'. Our gentleman driver performed the first part of the race well losing some positions but facing the Lamborghini Huracan GT3 car driven by C. Mézard (Scuderia Villorba Corse). The No. 88 car had some problems during the pit stop due to a trouble to the power supply. A. Baccani (Ebimotors) replaced his mate on the ninth position. But the turn of events did not end. Twenty minutes before the end of the race it started raining hard. All crews drove back to the pits to change tyres while we decided to go on with the race to avoid the risk of not starting because of the previously found problem.

The race was compromised for the crew Venerosi-Baccani who ended on the ninth GT3 place.

The next prestigious round is Road to Le Mans, which is scheduled on 15th June.