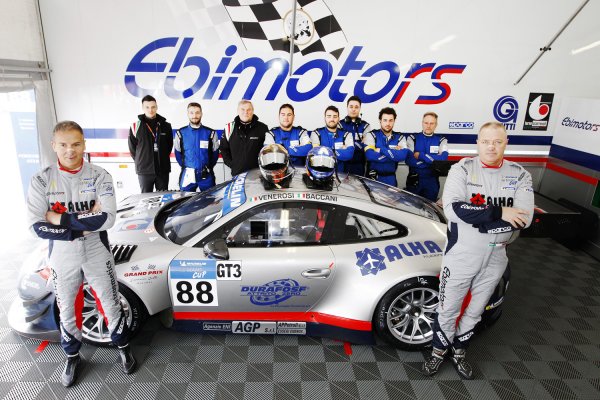 Good debut for the R #88 car in Le Castellet

2018 sports season began with the first round of the Michelin Le Mans Cup championship on Paul Ricard circuit.

In the GT3 category seven cars were on the grid. Among these there was our Porsche 911 GT3 R driven by our consolidated Florentine team composed by Paolo Venerosi and Alessandro Baccani. Their direct competitors were six Ferrari cars: one F458 Italia GT3 and five F488. The only car representing the Stuttgart horse was Ebimotors’s car, which warmed up its engine during the official tests on the colourful circuit in Le Castellet last Wednesday, some days before the racing weekend. Due to the dangerous conditions of the racetrack, because of heavy rainy days, the Porsche no. 88 car was obliged not to start.

Thanks to better weather conditions, last Friday the two scheduled sessions of Free Practice could take place. Each session lasted 60 minutes. Both bronze drivers could practise on the racetrack and test their new car, which is the only one of its model in Italy. Last Saturday, in a sunny day, the 15-minute-Qualifying Practice could take place. Despite his honours and obligations, A. Baccani had a relaxed Practice and could place his Porsche no. 88 car on the fourth position, which means the second line of the GT3 class, with a time of 1’58.644. P. Venerosi had an excellent start at the 2 Hours of Le Castellet. Our gentleman driver had a stable performance and was clever in managing the lapping by the LMP3 prototypes and keeping J. Hartshorne’s Ferrari no. 50 car (Kessel Racing) behind his Porsche despite Hartshorne tried to overtake him continuously. Thanks to his perseverance and concentration, P. Venerosi passed his Porsche no. 88 car to his mate on the fourth position. At the 51th minute, A. Baccani started driving. He was soon obliged to serve a drive through inflicted to his mate due to the fact that he had previously crossed the line at the entrance of the pit-lane to change the driver. Luckily this penalty let the position unchanged thanks to the gained gap. A. Baccani had a stable performance and, after the last 65 minutes left, he placed his Porsche no. 88 car on the fifth position.

The crew Venerosi-Baccani had a good performance. Whereas it was their first seasonal experience in an endurance race on a circuit they were not familiar with, the new car had to be tested and the level of the championship was high, the two drivers can be satisfied, even if they know they will be able to perform better.

Next round is scheduled on May, 12th on Enrico Borghi’s circuit.

See you in Monza!