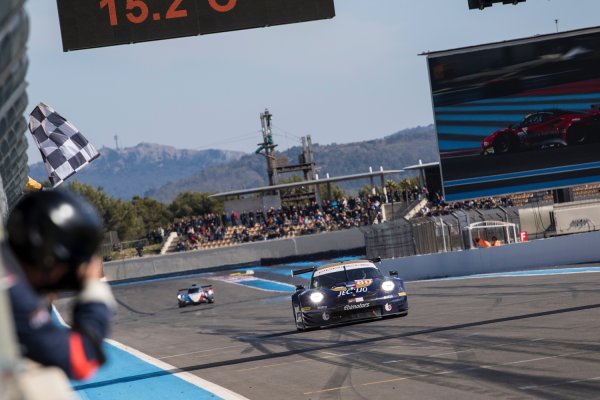 The first round of the European Le Mans Series championship took place at the wet Paul Ricard circuit last weekend. The newcomers Sébastien Fortuna and Marco Frezza, supported by the experienced Fabio Babini, inaugurated the 2019 sports season on the fabulous Porsche 911 RSR car. Ebimotors crew took advantage of their given time to get familiar with the No. 80 car on the French racetrack, despite the critical weather conditions. The training was done not only on the racetrack, but also in the pit stop improvement with driver change, which are deeply important in this kind of races.

The starting grid was competitive and nine crews started in the LMGTE class led by Porsche and Ferrari for a total amount of forty-one cars on the racetrack in the three different categories. The delicate Qualifying Practice was managed by F. Babini (Ebimotors), who could place his No. 80 car on the sixth position with the time of 1:53.963.

The Italian-French driver S. Fortuna (Ebimotors) started the four-hour endurance race. He could manage the delicate rolling start. A good stint by our gentleman who, after an exact hour from the start, passed his car to his crew mate on the eighth class position. F. Babini (Ebimotors), who replaced him on the No. 80 car, was motivated and concentrated and, lap after lap, he gained some positions and could reach the temporary third class place. Our gold driver’s performance was amazing and this gave a good gap to the team. S. Fortuna (Ebimotors) joined the track again to end his given race time. Our bronze driver kept a good speed while trying to protect his position. He finally passed his car to M. Frezza (Ebimotors) on the fifth place. Our silver driver was given the delicate task to manage the final part of the race and he performed taking advantage of his potentialities. Fortuna-Frezza-Babini gained the sixth position in the LMGTE class.

`I am very satisfied with the seasonal start. – said the owner Enrico Borghi – The great effort made by both the drivers and the team were more important and fundamental in this usual race with really few strategies due to the lack of safety car and yellow flags.´

Next round is scheduled on 11th and 12th May for the 4 Hours of Monza.