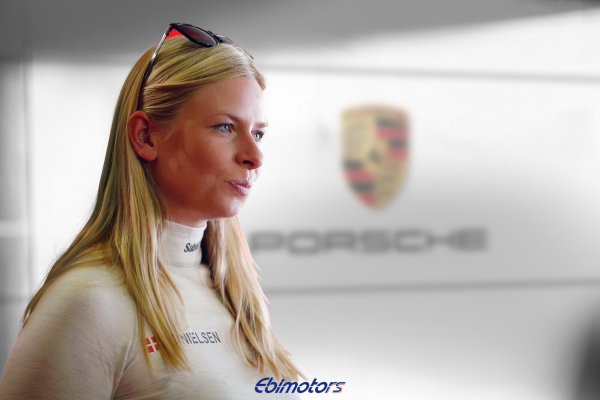 Christina Nielsen joins Ebimotors at the 24 Hours of Le Mans

In 2016, Christina Nielsen was the first Danish female to enter the most important endurance race in the world. Since then, she hasn’t slowed down, and this year marks the sportscar champion’s third consecutive entry into the legendary 24 Hours of Le Mans event. From June 16th to the 17th, Nielsen will compete in the LM GTE Am class with the Italian team Ebimotors in Le Mans, France. She will co-drive the No. 80 Porsche 911 RSR with Italian endurance specialist Fabio Babini, with a third driver to be announced in due course.

In the past, Christina competed at Le Mans with Ferrari. This year, she’s racing with Porsche, the marque that has won the most victories at this storied circuit. She began her race season with Wright Motorsports in the IMSA WeatherTech SportsCar Championship, and will race with the team’s 911 GT3 R for the full season. Contesting Le Mans with Porsche at the Circuit de la Sarthe adds another highlight to her already impressive racing calendar. Nielsen is currently part of Porsche Motorsport’s new program where she is a “Selected Driver” representing North America, and the first female in Porsche’s history to be officially associated with the factory.

“I’m super happy to go back to Le Mans,” Nielsen confirmed. “It’s one of those races that a driver dreams about doing at least once in their lifetime. Being able to say, at the age of 26, that I’m going to my third Le Mans is definitely pretty amazing. I’m excited to compete with the mid-engine Porsche — that’s a first for me and definitely one of the biggest wishes that will come true." .

Ebimotors, the current Michelin Le Mans Cup champions, is an official partner of Porsche and has 24 Hours of Le Mans-winning pedigree in both its management and driver lineup. In addition to Nielsen, two-time winner Babini will join the team for his eighth Le Mans. In 2001, he won with a Porsche 911 GT3-RS, and he took 2nd place at the French race in both 2008 and 2009.

"I’m very happy to have Christina with us at the 24 Hours of Le Mans,” said Enrico Borghi, Ebimotors’ team manager. “The opportunity to be part of this incredible event is a great honor. Christina is young but already well experienced. The added value of this partnership is represented by the fact that Christina is also one of the Porsche Selected Drivers for 2018." .

Nielsen is also looking forward to her first race with the Italian squad. “Ebimotors is the team that my past [Scuderia Corsa] co-driver, Alessandro Balzan used to drive for, and he has spoken very highly of them,” Nielsen said. “I’m excited to work with them. Everyone on the team has been super sweet and has welcomed me with open arms, so I look forward to getting to know them better." .

Nielsen joins a handful of other drivers from Denmark, but as always, she stands out as a female driver on the 60-car, multi-class grid. “Le Mans is always a great race for me, being a Dane,” Nielsen continued. “The Danish support is amazing, and it’s a great place for me to get exposure for our partners and sponsors. Last year I was the only woman, and the year before there were two girls. It’s definitely something that creates a lot of attention — but once the flag drops, we’re all just drivers. I can’t wait to go racing." .