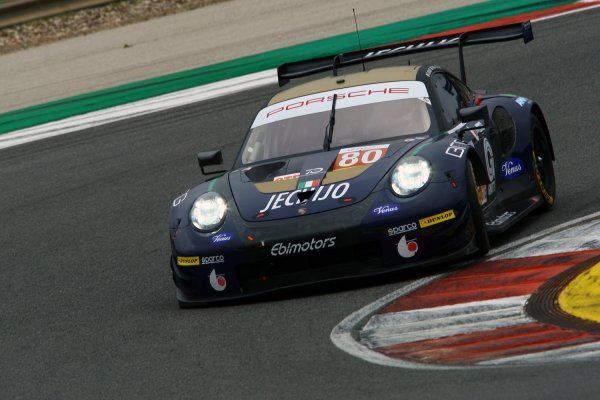 Portimão: what a pity!

The sixth and last seasonal round of the European Le Mans Series championship was raced on the Portuguese up and down racetrack last weekend. For the Ebimotors team there was a beautiful surprise: Gianluca Giraudi replaced the bronze driver Bret Curtis who, due to his business schedule, could not take part to the race. The new and fully Italian team, composed by Gianluca Giraudi, Riccardo Pera and Fabio Babini, charged up to do their best on their Porsche 911 RSR No. 80 car.

The four-hour race started with G. Giraudi (Ebimotors) who managed his car with concentration and avoiding any possible accidents. All crews were very aggressive and determined to gain as many points as possible for the championship standings. Our gentleman driver G. Giraudi (Ebimotors) had an excellent performance ending his stint, activating some overtaking and adjusting on his direct class rivals. He passed his car on the fifth position to his crew mate. F. Babini (Ebimotors), who replaced him on their No. 80 car, recovered some time ending his stint as better as he could. G. Giraudi (Ebimotors) joined the racetrack again after the second pit stop on the second class position. Everything was working well till one hour and a half before the end of the race when our car had an accident with the prototype driven by G. Mondini (Eurointernational). This made us stop the race due to the break of the right rear suspension. This was really a pity for all of us and above all for R. Pera (Ebimotors) who was going to join the race on our No. 80 car.

The Ebimotors team has ended his debut in the European Le Mans Series championship with our Porsche 911 RSR car on the fifth LMGTE class place. Four podiums were gained (3 third positions and 1 first position). This has been a great result for the team owner Enrico Borghi: `A special thanks goes to our drivers Raymond Narac, Bret Curtis, Gianluca Giraudi, Riccardo Pera and Fabio Babini, our technicians and our partners who trusted on us, JECHIJO, Gnutti, Terno Scorrevoli and Sparco.´.