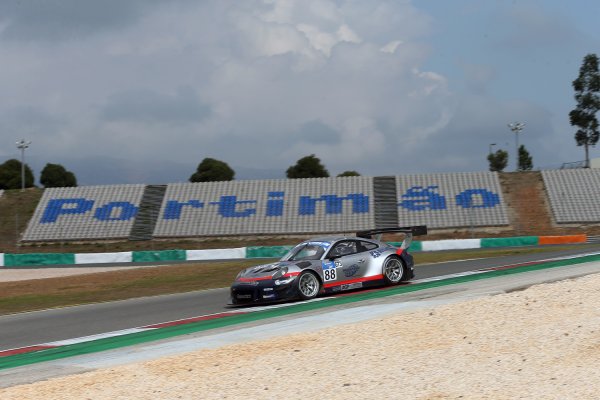 Gran final of the season for Venerosi-Baccani

The last round of the Michelin Le Mans Cup championship was raced on the racetrack of Algarve in Portugal last weekend. Seven cars lined up in the GT3 category with the addition of a Ferrari 488 GT3 car driven by Sernagiotto-Gostner. As usual, to represent Ebimotors there was the fully Italian crew composed by Paolo Venerosi and Alessandro Baccani on their Porsche 911 GT3 R No. 88 car.

Also for Portimão round, the Qualifying Session was managed by A. Baccani (Ebimotors) who placed his No. 88 car on the second class position with the time of 1'46.964. Before him, only the Ferrari 488 GT3 car driven by Pianezzola-Piccini (Kessel Racing), who had become class champions during the previous round in Spa-Francorchamps.

The Sunday race was characterised by low temperatures and wet racetrack on some spots. P. Venerosi (Ebimotors) managed his start without any mistakes. While the safety car was firstly entering the race due to debris, P. Venerosi (Ebimotors) was temporarily on the fourth class position. A. Baccani (Ebimotors) replaced his crew mate on their No. 88 car on the same position and, despite some little mistakes, he could end the two-hour race on the fifth GT3 class position.

The crew Venerosi-Baccani has just ended their first experience on the Porsche 911 GT3 R car in the Michelin Le Mans Cup championship. They faced new racetracks and they placed on the fifth position both in the drivers’ and teams’ standings.