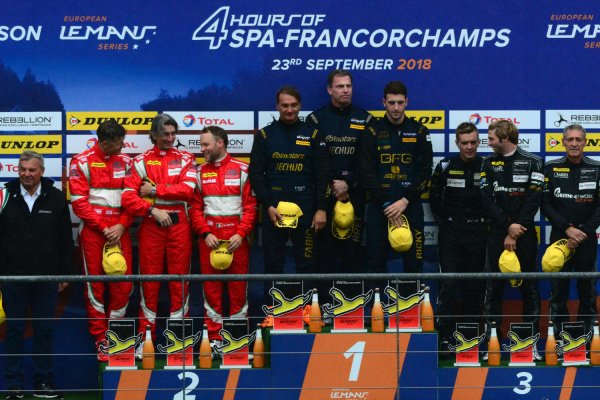 The second to last seasonal round of the European Le Mans Series championship was raced on the mythical Belgian racetrack of Spa-Francorchamps last weekend. In the LMGTE category, Ebimotors drivers, Bret Curtis, Riccardo Pera and Fabio Babini, on their Porsche 911 RSR No. 80 car, had a great challenge to face due to very complicated weather conditions.

Qualifying session, performed by R. Pera (Ebimotors), was raced in dry racetrack conditions and this allowed our young driver to place his No. 80 car on the third class position with the time of 2'17.183. The twin Porsche RSR cars (Proton Competition) placed before, the No. 88 car, driven by M. Cairoli, who gained the pole position with the time of 2'15.654 and the No. 77 car, driven by D. Olsen (2'16.354), respectively.

As forecast, last Sunday weather conditions were bad and so the race control imposed the race to start following the safety car, due to safety reasons. After nearly fifteen minutes from the race start, R. Pera (Ebimotors), determined and forceful, gained the class leadership in the first laps. First, he overtook C. Ried (Proton Competition) and then G. Roda (Proton Competition). After that, the safety car was forced to join the track again due to a prototype out of the race and benefiting from this, we had a pit stop for both refuelling and driver change. The pit stop was very fast (the best seasonal of ours) and F. Babini (Ebimotors) started his race on our No. 80 car keeping the first class position. While rain conditions were worsening, the No. 77 car, driven by C. Ried (Proton Competition), was hit by a prototype. After a short restore of the car body, the driver was back to the track. The race control decided to bring the safety car back due to the worsening of weather conditions and after two hours and five minutes from the race start, the race was stopped because of unsafe conditions. So, our crew, Curtis-Pera-Babini, won the race and Ebimotors team was on the winner’s podium for the first time in this championship. Thanks to the gained points for this race, even if they were divided in half because the race did not last four hours, we reached a higher position placing on the fourth position in the LMGTE standings.

The championship is wide open and everything will be decided in the next, which is also the last, seasonal round, in Portimão on October, 28th.