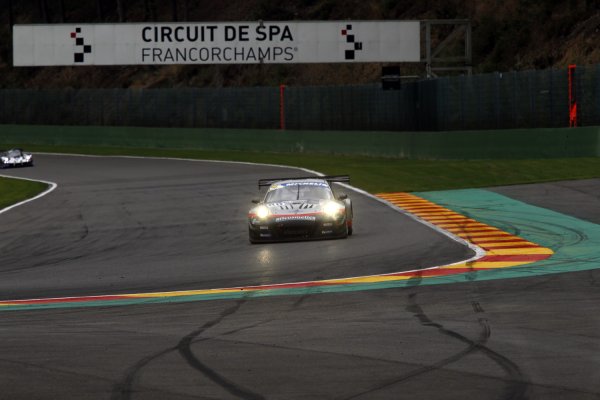 The second to last round of the Michelin Le Mans Cup championship was raced on Spa-Francorchamps racetrack last weekend. It was a great challenge for Ebimotors crew composed of Paolo Venerosi and Alessandro Baccani on their Porsche GT3 R No. 88 car in the GT3 category.

Despite the changeable weather during all Belgian weekend, the Qualifying Session, performed by A. Baccani (Ebimotors), wasn’t in the rain but the racetrack conditions were very uncertain. Seven minutes before the session end P. Perazzini (AF Corse) lost control on his Ferrari 488 GT3 No. 71 car, slamming against tyres. The procedure to restore the racetrack was long. At the restart A. Baccani (Ebimotors) could improve his time placing his No. 88 car on the second position in the GT3 category (2'32.295). Before him, only the Ferrari 488 GT3 No. 8 car, driven by S. Pianezzola (Kessel Racing), could place.

The two-hour-race started with P. Venerosi (Ebimotors), who was driving in very changeable weather conditions. The start was really exciting because of many prototypes which were stalled due to worsening of the racetrack conditions. This was also the reason why our gentleman driven was forced to have an extra pit stop to replace tyres and consequently losing some positions. At about the half of the race A. Baccani (Ebimotors) replaced his mate on their No. 88 car while the race was officially declared a wet race. Unfortunately, the matured gap didn’t allow us to gain positions and we ended the race on the fifth GT3 category place. The Ferrari 488 GT3 No. 8, driven by Pianezzola-Piccini (Kessel Racing) won the race and the seasonal championship one round early.

Venerosi-Baccani crew, on the fifth absolute position at the moment, are ready to do their best on the last round of the championship, which is scheduled in Portimão on October, 27th. They are aiming at the third position in the GT3 category.