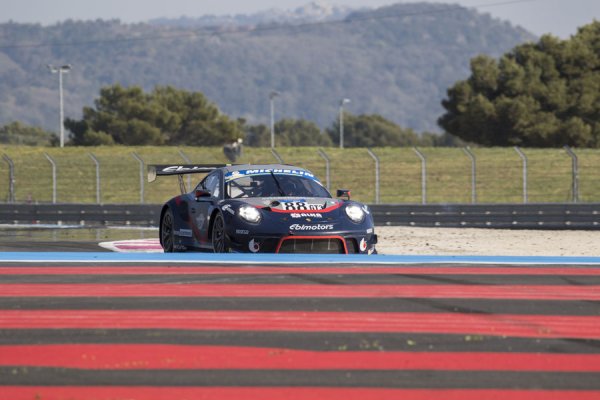 For the first time the Michelin Le Mans Cup championship has debuted in the 2019 sports season with ten crews in the GT3 category. At the Paul Ricard circuit for the first round the car manufacturers on the starting grid were five, among which there were the Mercedes AMG GT3, the Ferrari 488 GT3, the Lamborghini Huracan GT3 and the Aston Martin Vantage GT3. The only car representing the horse from Stuttgart was our No. 88 car driven by Paolo Venerosi and Alessandro Baccani. Compared to the previous season, the new Ebimotors crew had to face very high level opponents.

Despite the few kilometres driven during the official test and the Free Practice, due to uncertain weather and varying racetrack conditions, A. Baccani (Ebimotors) could place his Porsche 911 GT3 R MY19 on the fifth class position with the time of 1:56.245.

The two-hour race started in the sunny weather and P. Venerosi (Ebimotors) performed his rolling start well. Despite the lost of some positions, our gentleman could drive steadily and kept away from any bagarre or easy contact with the prototypes. P. Venerosi (Ebimotors) made use of the safety car together with the expiry of his time and passed his No. 88 car to his partner on the seventh class position. The driver change was regular and one hour was missing to the end of the race. A. Baccani (Ebimotors) was back to the racetrack behind the safety car. At the restart there was much traffic and while our pro driver was searching to gain some positions, his car was rammed by a prototype which caused it a spin at the centre of the racetrack. Due to this accident, the No. 88 car was hit on its front part and this made a damage on its bodywork which obliged A. Baccani (Ebimotors) to stop his race due to safety reasons.

The debut for Venerosi-Baccani was surely not the one they had hoped but the two drivers are satisfied with the new car, which has been improved compared to the last model. The next and second round of the championship is scheduled on 11th and 12th May at the Monza Eni Circuit.