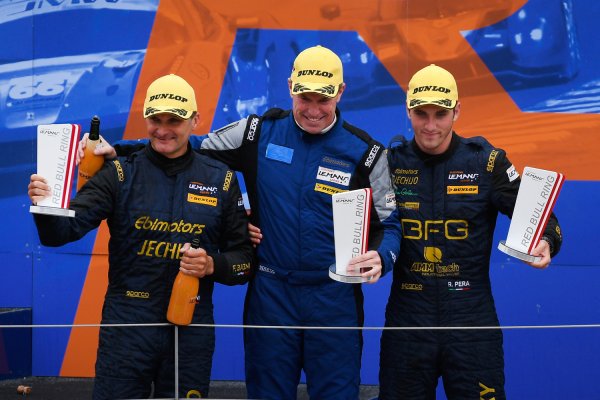 Last weekend the third round of the European Le Mans Series championship took place at the Red Bull Ring. Ebimotors team had a change in their crew: starting from this round, Bret Curtis replaced the bronze driver who, due to his work, could not end the racing season. Special thanks are due to R. Narac for our beautiful adventure together till now. The Texan driver had his debut both on this racetrack and on driving the No. 80 Porsche 911 RSR car but, despite this, he achieved an excellent time (1'31,498) in the bronze test. He was the fourth gentleman. Both Riccardo Pera, on his first time on the Austrian racetrack as well, and Fabio Babini, the crew veteran, were confirmed. Six cars were enrolled in the LMGTE category.

Our nineteen-year-old driver from Basilicata, R. Pera (Ebimotors), placed his No. 80 car on the sixth position with the time of 1'29.366. All crews were enclosed in a time of only five tenths. The pole position went to M. Molina (JMW Motorsport - 1'28.827).

Rolling start on the dry racetrack for B. Curtis (Ebimotors), who could manage the race very well and reached the fourth class position in the first two laps. He overtook both the No. 55 by D. Cameron (Spirit of Race) and the No. 86 by T. Krohn (Krohn Racing) cars. Shortly after, the Ferrari No. 55 car could overtake again but, thanks to his great performance, our brand new bronze driver could regain his fourth place while improving his stopwatch times lap after lap and overtaking the No. 77 car driven by C. Ried (Proton Competition). B. Curtis (Ebimotors) passed his No. 80 car to R. Pera (Ebimotors) who kept the gained fourth position. First full course yellow of the race for the car No. 66 lead by A. MacDowall (JMW Motorsport), who didn’t change the temporary standings as he was placed on the last LMTGE class position but first in the championship at that moment. All crews took advantage to have their pit stop apart from us, who were obviously leading the race. Another turn of events: the safety car joined the track for the first time and at that moment he had the driver change. B. Curtis (Ebimotors) replaced R. Pera (Ebimotors) and took back the fourth class position, even if he lost major seconds while they had their change. At the half of the race, B. Curtis (Ebimotors) was working hard and, without losing his concentration, he passed his No. 80 car to his partner on the same place. F. Babini (Ebimotors) managed the last hour of the race while it started raining on the Austrian racetrack. Our gold driver had a great performance and tried to overtake the No. 77 car driven by D. Olsen (Proton Competition), who was on the third class position. A turn of events at five minutes before the end of the race: the race control imposed a drive through to the Porsche Young Professional driver for track limit. He was so forced to pass through the pit lane. This was a stroke of luck for the Ebimotors crew who ended the 4 Hours of the Red Bull Ring on the third LMGTE class position.

The crew Curtis-Pera-Babini kept their second place both in the drivers’ and teams’ standings.

Next scheduled round is on August, 18th in Silverstone with our Porsche 911 RSR car. Special thanks are due to Proton Competition team for their cooperation.