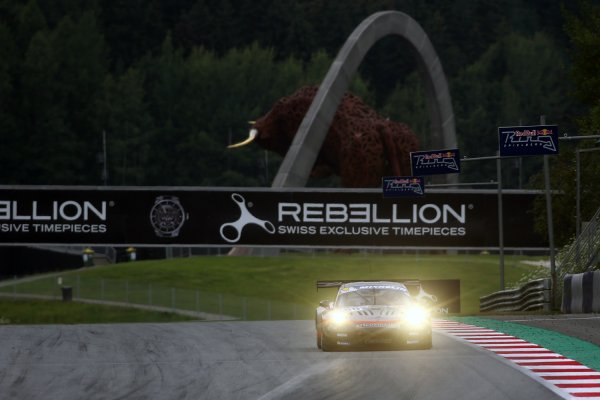 Turning point for the Michelin Le Mans Cup championship at its fourth seasonal round. Six cars were enrolled in the GT3 class at the Red Bull Ring. Our No. 88 Porsche GT3 R car, driven by Paolo Venerosi and Alessandro Baccani, was among them. There was a new entry car on the Austrian racetrack: the Mercedes AMG GT3 car by the Italian team Krypton Motorsport, driven by the crew Zanuttini-Pezzucchi.

P. Venerosi (Ebimotors) started from the second line of the GT3 category behind the safety-car, due to unsure racetrack conditions for bad weather. The Ferrari No. 8 car (Kessel Racing), just before us, served a drive through, which was imposed during the previous round of the Road To Le Mans. P. Venerosi (Ebimotors) tried to protect his gained position. Despite his good performance, our driver could not prevent both Ferrari No. 51 (Spirit of Race) and No. 71 (AF Corse) cars overtaking him. At that moment we were placed fourth. Mercedes was strongly leading (Krypton Motorsport). In the meantime, the Ferrari No. 8 car, driven by S. Pianezzuola (Kessel Racing), overtook our car, after having served their drive through. P. Venerosi (Ebimotors) passed his car to his mate while he was on the fifth class position. A. Baccani (Ebimotors) managed the second half of the race while the racetrack was getting completely dry. Great stint by the Ebimotors driver, who could not fill the gap and placed fifth in the GT3 category.

Next scheduled round is in Spa-Francorschamps on September, 22nd, after the summer break.