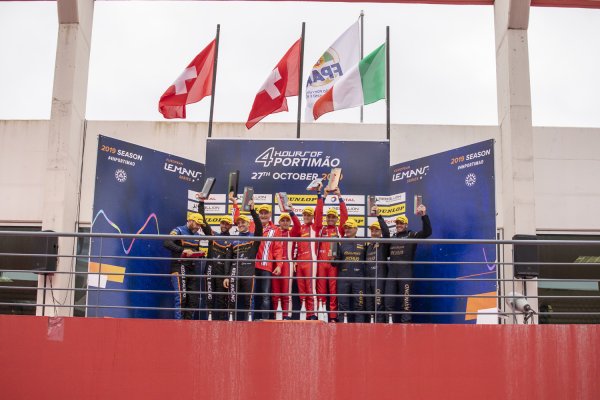 "3 Hours of Portimão"? P3 for Giraudi-Frezza-Babini

The last seasonal round of European Le Mans Series 2019 championship took place last weekend and our Porsche 911 RSR car returned to the race after skipping the two rounds of Silverstone and Barcelona. Gianluca Giraudi, together with Marco Frezza and Fabio Babini, drove our No. 80 car.

With the time of 1:43.228, M. Frezza (Ebimotors) placed our flagship car on the eighth class position.

G. Giraudi (Ebimotors) managed the rolling start in a big way. During the first lap four LMGTE cars were involved in a fileup, caused by an accident between two prototypes. Both Porsche 911 RSR cars of Proton team were irreparably damaged by this accident. As to the Ferrari F488 GTE EVO cars of JMW Motorsport and Kessel Racing, after the pit stop, the first car rejoined the race, while the No. 83, driven by a female crew and which was more seriously damaged, ended the race at that moment. Luckily, our gentleman driver was not involved in any accidents and then the race was stopped to allow marshals to clear and secure the racetrack. While the time was passing, all cars were lined up at the start grid in according with the regulations and after nearly one hour from the green light, the cars could restart after the safety-car. G. Giraudi (Ebimotors) was on the third class position at that moment and five LMGTE cars were still in the bagarre. Before our car, there were only the Ferrari F488 GTE EVO, driven by L. Lavergne (Luzichy Racing) and by S. Pianezzola (Kessel Racing), who was leading the race. The first race stint was not easy and characterised by other safety-cars. In these cases, the team strategy is fundamental. At that moment, F. Babini (Ebimotors) replaced G. Giraudi (Ebimotors). He had the task to protect his mate’s position and he did it. M. Frezza (Ebimotors) had to managed the last and very important phase of the race. He had to strongly face a bagarre with the Ferrari F488 GTE EVO No. 55 car driven by M. Griffin (Spirit of Race) for the third class position. As for the whole race, also the end was breathtaking: the crew Giraudi-Frezza-Babini could reach the third step of the podium.

For Enrico Borghi’s team, this was a perfect end of an uneasy season.