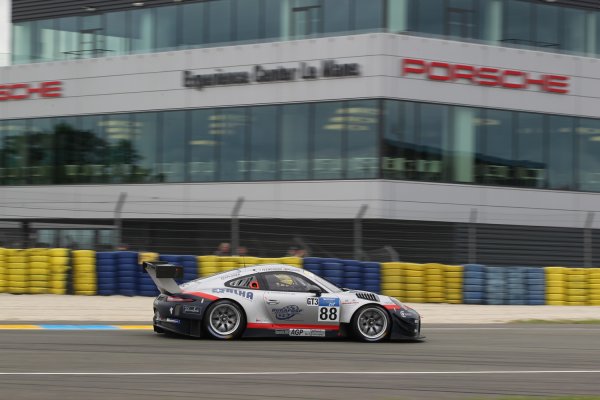 The third round of the Michelin Le Mans Cup championship went on stage in the prestigious context of the 24 Hours of Le Mans. Eight GT3 cars, among whom our Porsche GT3 R No. 88 car, joined the Road To Le Mans, which, differently from the past, was raced into two races of 55 minutes each.

Race 1. Last Thursday in the first race P. Venerosi (Ebimotors - 4'12.174) started from the sixth class position due to a session of Qualifying Practice influenced by many red flags. P. Venerosi (Ebimotors) had a good race speed and managed the first part of the race as well as he could and passed his car no. 88 to his partner on the fourth position, so gaining two places. A. Baccani (Ebimotors), replacing his mate, unfortunately ran into a long 'slow zone', a race condition in which all cars are forced not to exceed the speed of 80 kms/h. A. Baccani (Ebimotors) could not recover the lost time and ended the race on the seventh GT3 category position.

Race 2. In the Saturday race, P. Venerosi (Ebimotors) started on the third position, which was previously gained by A. Baccani (Ebimotors - 4'02.928) in the second round of Qualifying Practice. Also in this race P. Venerosi (Ebimotors) had an excellent performance and kept his position till his passage to his mate. A. Baccani (Ebimotors) managed the second half of the race trying to perform better than in Race 1 and to reach the Ferrari F458 Italia GT3 car, driven by G. Forgione (Stile F Squadra Corse), who was on the second position. Unfortunately, A. Baccani (Ebimotors) had a bad weekend because 15 minutes before the chequered flag he lost control of his Porsche No. 88 making an about-turn. The precious lost seconds moved him back to the sixth position. Thanks to the drive through imposed to the no. 69 car at the end of the race, we could gain the fifth class position.

In spite of everything, this was a great first experience for the crew Venerosi-Baccani on one of the most desired racetrack of the motorsport. And this allowed the team to gain precious scores for the championship.

Next round is at Red Bull Ring on July, 21st.