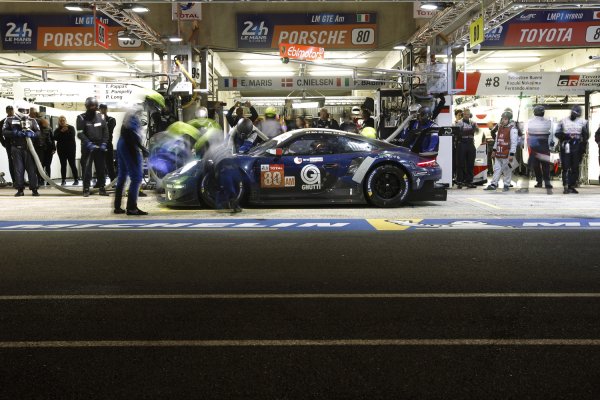 The 86th edition of the 24 Hours of Le Mans, the first one which Ebimotors team took part in while celebrating their 20th anniversary, has just come to an end. Sixty crews joined the race and were divided into four categories: in the GTE-Am category thirteen direct adversaries raced against our Porsche 911 RSR No. 80 car, driven by Erik Maris, Christina Nielsen and Fabio Babini.

The best time of the three sessions of the Qualifying Practice was achieved by the gold driver F. Babini (Ebimotors - 3'53.402), who placed his No. 80 car on the seventh GTE-Am class position.

The usual rolling start of the most important, prestigious and magnificent endurance race of the world, which is organised by ACO (Automobile Club de l'Ouest), was managed by our silver driver C. Nielsen (Ebimotors), the only woman taking part to the race. 4,524 kms raced, 2,170 litres of petrol, 332 laps, 25 pit stops, 15 sets of tyres and 13 driver changes allowed Erik Maris, Christina Nielsen and Fabio Babini to end the race placing their No. 80 car on the 6th GTE-Am category position, the 33th absolute place.

Enrico Borghi - Team principal – whose 66th birthday occurred in Le Mans - said: `I duly would like to thank my team, my drivers and our partners who believed in this adventure as I did. I also would like to thank all our fans who supported us. It is difficult to describe such an experience if you do not live it. I hope it will be the beginning of a permanent attendance...´.

Next event is the fourth round of the European Le Mans Series championship which is scheduled at the Red Bull Ring on July, 22nd.