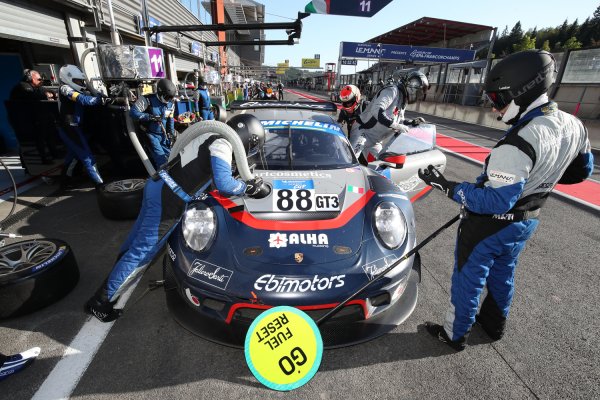 The fifth round of the Michelin Le Mans Cup 2019 championship took place in Belgium last weekend. A new crew raced for Ebimotors. To share our Porsche 911 GT3 R car there were Paolo Venerosi together with Daniel Mancinelli, who replaced Alessandro Baccani just for this round. For both drivers, this was not their first time on this special racetrack: Paolo Venerosi had his personal debut last season while Daniel Mancinelli raced at the 24 Hours in 2016. Ten cars were enrolled in the GT3 category.

After a good session of Free Practice, a little problem occurred to the No. 88 car after 15 minutes from the beginning of the Qualifying Practice. This enabled P. Venerosi (Ebimotors) to reach a satisfying position and he had to settle for the ninth place (2:29.734). This motivated him to perform even more better in the race.

P. Venerosi (Ebimotors) started his race on the eighth position due to the penalty imposed to the Aston Martin Vantage GT4 (Beechdean AMR) on the starting grid. Our gentleman driver was brilliant in managing the first delicate part of the race, which was characterised by some prototypes undergoing an about-turn. Our driver could gain more and more positions. First, he reached P7 thanks to an off-track made by the Ferrari 488 GT3 car, driven by A. Piccini (Kessel Racing). Then, he overtook the Mercedes AMG GT3 (Krypton Motorsport), driven by M. Zanuttini who later ended the race. P. Venerosi (Ebimotors) was on the sixth class position when he was reached by F. Lavergne (Luzich Racing). A dramatic turn of events: the safety-car joined the racetrack due to rubble left by some prototypes few minutes before the pit lane opening. Then, the cars regrouped and our team took this opportunity to do the compulsory driver change. D. Mancinelli (Ebimotors) was back to the racetrack on the sixth place trying to recover the Mercedes AMG GT3 (Scuderia Villorba Corse) which was, at that moment, on the fifth position. The driver from Marche region performed brilliantly and tried to recover his gap till the end, despite his big disadvantage. Thanks to the drive through imposed on M. Calamia (Scuderia Villorba Corse), due to his overtake on the safety-car under the yellow flag, the crew Venerosi-Mancinelli placed their car on the fifth GT3 position.

The great end of season is scheduled in Portimão on 27th October.