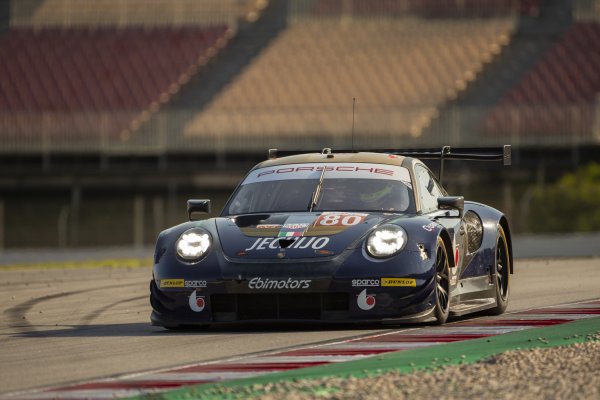 The third round of the European Le Mans Series 2019 championship took place in Barcelona last weekend. The championship came back to the Catalunya circuit after ten years with a change. Due to hot weather, the promoter made the four-hour race take place on Saturday night. Eight LMGTE cars enrolled apart from the Porsche 911 RSR No. 88 (Proton Competition). Our No. 80 car was shared by the team new entry Edward-Lewis Brauner together with Marco Frezza and Fabio Babini.

The 10-minute Qualifying Practice was raced by our silver driver M. Frezza (Ebimotors) who, with the time of 1:44.178, placed our Porsche 911 RSR car on the eighth class position.

The first race stint was committed to our gentleman driver E.L. Brauner (Ebimotors), who managed the start well and kept a steady speed. Despite the fact that it was his first time on the Porsche 911 RSR car, he took the decision to drive for a double stint. After two hours and considering the technical difficulties of the car and the prohibitive temperatures, E.L. Brauner (Ebimotors) passed his No. 80 car to his mate on the fourth place. Once replaced the German driver, F. Babini (Ebimotors) immediately felt a strange vibration on the back-end. So, an unplanned pit-stop was decided but, once again to the racetrack, the same symptom appeared again and the driver was forced to drive back to pits to definitively replace the damaged back diffuser. Despite the quick job of the technicians, F. Babini (Ebimotors) went back to the race on the seventh class position with three laps of disadvantage. M. Frezza (Ebimotors) had the hard task to manage the last hour of race but the two pit-stops did not allow us to get back in the race and we ended the race on the seventh class position.

An unlucky weekend ended without any wished scores in the general standings.

Next round is scheduled on 31st August in conjunction with the 4 Hours of WEC - Fia World Endurance Championship.