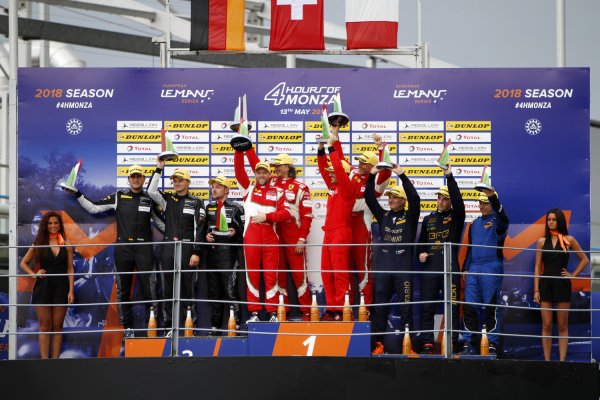 Last weekend the European Le Mans Series championship arrived to Monza for its second seasonal round. Many supporters, like clients, friends and fans, were there for Ebimotors. Monza was the only Italian home round for Enrico Borghi’s team. It represented a big responsibility for the Italian-French crew who had to protect their Porsche 911 RSR car in the LMGTE category.

Expectations were not disappointed thanks to the marvellous pole position reached by our nineteen-year-old driver, R. Pera (Ebimotors), who imposed his car no. 80 with the best time of 1'47.493 placing before major drivers like G. Bruni (Proton Competiton), M. Lieb (Proton Competition) and M. Molina (JMW Motorsport). The excellent third position by R. Narac (Ebimotors) deserves to be mentioned in the test dedicated to the bronze drivers.

The four-hour endurance race started with the leader of the LMGTE class, R. Narac (Ebimotors), adopting a great strategy to keep away from the LMP3 prototypes aiming at avoiding any possible scuffle at the treaded first turn. The twin car no. 88 was driven at a quite high speed by G. Roda (Proton Competition) who overtook us and made us place temporarily on the second class position. Following our car, there was the Ferrari no. 66 by M. Molina (JMW Motorsport). For a while, R. Narac (Ebimotors) could reach the head of the race due to an off-track by G. Roda (Proton Competition) who did not face the curve. Due again to an off-track, R. Narac (Ebimotors) lost the right trajectory to dodge a prototype which was coming first and M. Molina (JMW Motorsport) benefited from this and overtook our car and reached the first place. The first safety car of the race, joining the racetrack due to a LMP3 which had a hard accident into the crash rails, allowed all LMGTE cars to have their first refuelling pit stop. All cars stopped apart from the Ferrari no. 55 (Spirit of Race) which went on following the safety car. This enabled it to gain one lap over all class competitors. R. Narac (Ebimotors) was still driving his no. 80 car placing on the forth position temporarily. Not all crews did their pit stop. After a while, another accident by a prototype forced the safety car to join the track again and our driver benefited from another refuelling pit stop and restarted again. Then, the safety car entered for the third time and our car still kept the forth place. R. Narac (Ebimotors) tried to overtake the car no. 88 driven by G. Roda (Proton Competition) who placed second while C. Ried’s no. 77 car (Proton Competition) was placed third. The Ferrari no. 55 (Spirit of Race) was still keeping the leading position. R. Narac (Ebimotors) got wrong with a curve without any consequences on his position. We have to underline that our gentleman had been driving for one hour and a half. R. Narac (Ebimotors) duly passed his car to his mate R. Pera (Ebimotors) keeping the forth class position. Also during the stint of our silver driver, the safety car was protagonist and again a refuelling pit stop occured. When the car restarted the race, it was still on P4 LMGTE. A fierce R. Pera (Ebimotors) gained on G. Roda Junior (Proton Competition) driving his car no. 88. He could overtake him reaching the third place. The two 911 RSR cars had a soft accident without any consequences two hours before the race end. And the safety car joined the track for the fifth time in this rough Monza round and again cars reached their pits for refuelling. At the restart of the race R. Pera (Ebimotors) was on the fifth position due to his pit stop and again the young driver was determined to gain another position reaching the fourth. At that moment the leader was still the Ferrari no. 55 driven by A. Scott, who replaced D. Cameron (Spirit of Race). On the second position there were M. Dienst (Proton Competition) and G. Roda Junior (Proton Competition). A drive thourgh was inflicted to G. Roda Junior by the race control due to an accident with a prototype. This enabled us to reach the third class position. R. Pera (Ebimotors) tried to recover the lost lap and fifty minutes before the end of the race F. Babini (Ebimotors) took the car from his mate. Our gold driver challenged both M. Dienst (Proton Competition), who was racing at a high speed, and M. Griffin (Spirit of Race), who shoved out. F. Babini (Ebimotors) enabled to end the race on the third LMGTE class position with great effort. This was a race with an expected big number of safety car entries, dramatic turns of events and successful or unsuccessful strategies.

The crew Narac-Pera-Babini gained a point on the overall standings reaching the second place both in the driver and team standings.

Next European Le Mans Series round is on July, 22nd at Red Bull Ring but our no. 80 car is taking part to the prestigious 24 Hours of Le Mans on June, 16th and 17th.

News about our crew are going to be released.