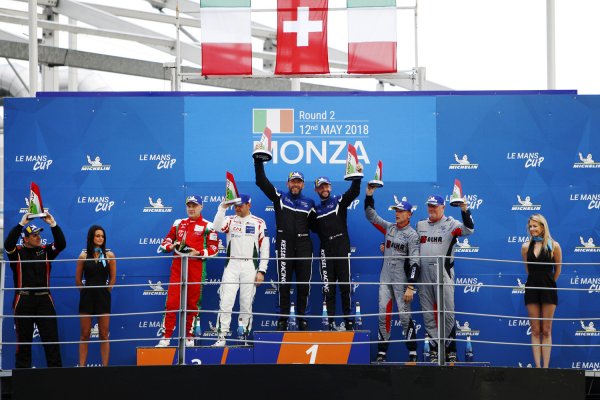 Podium for Venerosi-Baccani in Monza

The second seasonal round of the Michelin Le Mans Cup championship took place at the `temple of speed´ last weekend. Six crews of the GT3 category raced at the Autodromo Nazionale in Monza. Among these crews there was our unique Porsche GT3 R car driven by Paolo Venerosi and Alessandro Baccani.

Our home round could not start better than this: A. Baccani (Ebimotors) placed his no. 88 car on pole position with 1’49.330. It was a great satisfaction as our competitors, which were five Ferrari 488 GT3 cars, were really fierce.

The two-hour race started with P. Venerosi (Ebimotors) on the sixth line, twelfth absolute and first class position. Behind him there were three LMP3 to separate him from the second class position which was kept by the Ferrari no. 8 car driven by S. Pianezzola (Kessel Racing). As usual, the rolling start made the prototypes compact allowing the no. 8 car, which did not lose time, driving immediately behind our class leader P. Venerosi (Ebimotors), who cannot keep the same speed as S. Pianezzola (Kessel Racing) who took some advantage. At that moment our team was on the second class position. Then, first accident and first full course yellow of the race occured: all cars were forced to stop their speed at 80 kms/h to allow race officials to clear the racetrack after an accident occurred to two prototypes. Later, the race started again. The Ferrari no. 71 car, which was driven by P. Perazzini (AF Corse), reduced the gap and overtook our P. Venerosi (Ebimotors), who became third on the class positions. Despite another overtaking by the Ferrari #51 car, which was driven by C. Ulrich (Spirit of Race), our gentleman driver had a good performance both for his partial time and for his skill in managing time and overtaking by LMP3. At the 55th minute, P. Venerosi (Ebimotors) passed his no. 88 car to his teammate A. Baccani (Ebimotors) on the fourth class position. He was asked to gain some speed and positions. A. Baccani (Ebimotors) did not disappoint expectations and recovered the third class position on the Ferrari no. 77 car, which was driven by A. Piccini (Kessel Racing) at that moment. A series of yellow flags marked the second part of the race and for A. Baccani (Ebimotors) this meant protecting the gained place. He kept an excellent speed and well managed the few seconds that separated him from A. Piccini (Kessel Racing) who was inflicted a drive through. A. Baccani (Ebimotors) placed third. This was the first podium of the season for the crew coming from Florence.

Thanks to the gained points for this round, the crew Venerosi-Baccani reached a good position for the championship standings. They are forth both in the driver and team standings.

Next round is the important and prestigious ROAD TO LE MANS on June, 16th.