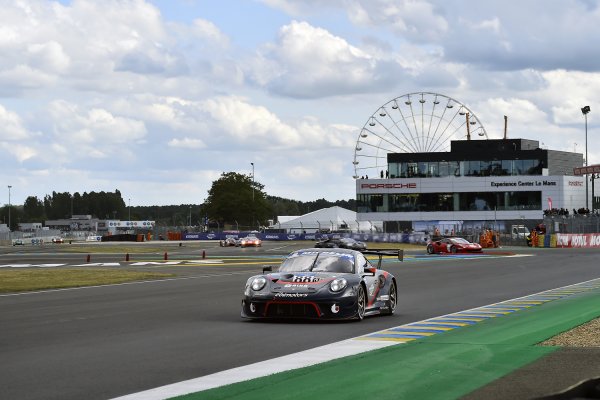 For our No. 88, double eighth position in the Road To Le Mans

The third round of the Michelin Le Mans Cup 2019 championship took place in the beautiful setting of the 87th edition of the 24 Hours of Le Mans last weekend. The GT3 cars, which were enrolled to the Road To Le Mans, were seventeen and represented six car manufacturers: Mercedes, Ferrari, Lamborghini, Bentley, Aston Martin and our and unique Porsche 911 GT3 R. Both Paolo Venerosi and Alessandro Baccani, who are part of our crew, came back to the prestigious French racetrack, after last year debut.

The format for this special event was different: Race 1 took place last Thursday afternoon while Race 2 last Saturday morning before the start of the 24 Hours race. Rolling start was confirmed for both races of 55' each.

P. Venerosi (Ebimotors) placed his No. 88 on the fifteenth class position in only 20' with the time of 4'12.264. It was a race characterised by some safety-cars which did not allow our team to adopt particular strategies, despite our gentleman driver’s good speed performance. A. Baccani (Ebimotors) replaced his mate and, in spite of his deep engagement, he drove his car to the eighth GT3 position.

In Race 2 P. Venerosi (Ebimotors) started the race on the sixth class position thanks to A. Baccani’s (Ebimotors) time of 4'05.418. The start was quite demanding due to some prototypes on the first lines but we were not involved. A. Baccani (Ebimotors) had a satisfying performance. Thanks to his improvement, lap after lap he could perfect his knowledge of the track and end the race on the eight GT3 place.

The result was positive for our crew Venerosi-Baccani, who gained one score in the general standings.

Next championship round is scheduled on 20th July in Barcelona.